The World’s Healthiest Cuisines: What Five Countries Can Teach Us about Good Eating Americans love to explore ethnic cuisines and then put their own “more is better” spin on them, like a Chinese stir-fry turned into chop suey with fried rice or a pasta side dish super-sized into a whole meal.

“We’ve Americanized dishes to the extent that they don’t have their original health benefits,” says Dr. Daphne Miller, a family physician in the San Francisco Bay area and author of The Jungle Effect: The Healthiest Diets from Around the World—Why They Work and How to Make Them Work for You.

Ingredients. The dietary benefits of green tea, fermented soy and mushrooms like shiitake and maitake are well documented. Add dried seaweed to this list. Beyond sushi, it’s a delicious ingredient in brothy soups, where it reconstitutes to add a noodle-like quality, slightly smoky flavor and beneficial minerals, including calcium, copper, iron, magnesium, manganese, molybdenum, phosphorus, potassium, selenium, vanadium and zinc.

Practices. Shimbo grew up in Tokyo, Japan, where her mother helped her surgeon father’s patients by preparing foods that helped them recover quickly. Shimbo believes wholeheartedly in Ishoku-dogen, a Japanese concept often translated as, “Food is medicine.”

Shimbo says, “I eat fairly well, treating food as blessings from nature that keep me healthy and energetic. I do not often indulge in expensive, rich foods.” She prefers eating foods in season and small portions, listening to what her body craves. When feeling the need for minerals and vitamins, she makes a brothy soup with just a little dried wakame, which reconstitutes to four times its dried volume.

A second practice supporting healthy well-being is hara hachi bu, or “Eat until your stomach is 80 percent full.” It requires self-discipline to eat slowly and decline more food. But this restraint supports a widely accepted fact that “It takes about 20 minutes for the brain to receive the message that the stomach is full. If we eat slowly, we get the message at the right time, even if we want a few more bites. If we eat too quickly, by the time our brain sends the message, we have probably eaten too much,” says Shimbo.

One Great Dish: Japanese soups offer nutrition and flavor in a bowl. Shimbo’s Eat-a-Lot Wakame Sea Vegetable Soup in her cookbook The Japanese Kitchen: 250 Recipes in a Traditional Spirit can be made with chicken or vegetable broth. Other healthy ingredients like sesame oil, fresh ginger, scallions and garlic boost its health benefits.

Ingredients. South India—including the states of Andhra Pradesh, Karnataka, Kerala, Tamil Nadu and Telangana—offers many plant-based dishes that feature coconut, rice and spices such as turmeric, known for decreasing inflammation, according to the Journal of Alternative and Complementary Medicine. Varieties of dried split peas called dal [dal is singular and plural] are used in vegetable curries and ground to make the gluten-free savory crepes known as dosa or puffy white idlis for a snack or breakfast.

South India native and current Minneapolis resident Raghavan Iyer, teacher, consultant and author of many cookbooks, including 660 Curries, says, “One technique that gives vegetable dishes a lift is dry-frying or toasting whole spices. It adds complexity and nuttiness.” Simply heat a cast iron skillet, add the whole spices and dry fry until spicy aromas arise; then add them to a dish.

One Great Dish: A vegetable/legume curry such as tamata chana dal, or smoky yellow split peas is simple to make. Iyer cooks dried, yellow, split peas with potatoes and turmeric, then dry-fries dried chilis and spices, and purées them in a blender for a no-fat, vegan and gluten-free dish. In Iyer’s view, “The epitome of comfort food is a bowl of dal and rice.”

Ingredients. There’s American-Italian, as in pizza with pepperoni and double cheese, and then there’s real Italian dishes dating back to the Etruscans. Healthy Italian starts with the love of growing things. Whatever grows in the garden is best, served simply with extra virgin olive oil; a recent Temple University study found it preserves memory and wards off Alzheimer’s.

Eugenia Giobbi Bone, co-author of Italian Family Dining: Recipes, Menus, and Memories of Meals with a Great American Food Family, says, “My palate was formed with the flavors of homegrown foods. Cooking in central Italy is all about bringing out the flavor of a few very fresh, well-grown ingredients. That means primarily seasonal eating, with lots of vegetables and little meat in summer, the opposite in winter. There isn’t a lot of fuss to the culinary style, which instead depends on interesting, but simple combinations of foods and techniques.”

Practice. Italian families’ view of healthful garden-to-table includes the exercise attained from gardening. “We have a good work ethic in our family,” remarks Bone, who lives in New York City and Crawford, Colorado. “We are of the mentality that physical work is satisfying, even when it is hard.”

From her father’s family, Bone has learned to break a meal into small courses and to eat heavier during the day and lighter at night because this helps maintain a healthy weight, according to many studies including one published in the UK journal Diabetologia.

One Great Dish: Dress up pasta with a seasonal vegetable sauce, such as caponata, an eggplant and tomato mixture, or include primavera via spring vegetables and basil, or arrabbiata, featuring tomatoes and red pepper flakes.

Ingredients. “So much about Lebanese cuisine is ‘on trend’ with our tart and sour flavors from lemon, sumac and pomegranate molasses, a wide array of vegetarian and vegan dishes, plus a tradition of pickling, called mouneh, and yogurt and cheese-making,” says food blogger Maureen Abood, author of Rose Water & Orange Blossoms: Fresh and Classic Recipes from My Lebanese Kitchen.

“Lebanese cuisine is extraordinarily healthy, fitting squarely into the Mediterranean diet.” Abood lives in East Lansing, Michigan, where she loves to use summer cherries and berries in her Lebanese-inspired dishes. According to Abood, another reason why Lebanese food is so popular is that Lebanese immigrants to the U.S. now outnumber the native population of their mother country.

Practice. Gathering to share food is a hallmark of Lebanese hospitality. “The Lebanese style of eating includes maza; many small shared plates of remarkable variety,” says Abood. “Food as medicine” is also a Lebanese practice, according to a study in the journal Evidence-Based Complementary and Alternative Medicine.

One Great Dish: “Many of my favorite Lebanese dishes are plant-based,” says Abood. “We love to stuff everything from cabbage to summer squash to grape leaves with vegetarian fillings, and cook them in a garlic or tomato broth. Every week, we make and eat mujaddara, a lentil and rice or bulgur pilaf with deeply caramelized onions.” Pair with any Lebanese salad, such as one she makes with sweet cherries and walnuts for “a perfectly healthy and crazy-delicious meal.”

Practice. The preferred style of Vietnamese cooking is steaming or simmering, using less fat. It also encourages communal eating, with each diner dipping an ingredient into a cooking pot. Cooked foods are accompanied by fresh salad greens, including herbs served as whole leaves.

One Great Dish: Vietnamese hot pot is a favorite of Andrea Nguyen, whose Vietnamese family emigrated to California. Nguyen, author of Into the Vietnamese Kitchen: Treasured Foodways, Modern Flavors, blogs about food at VietWorldKitchen.com and now lives near San Francisco, California. “This is a slow, cook-it-yourself kind of meal. Set it up, relax with some organic wine or beer and enjoy. Flavors develop and the hot pot transforms as you eat,” she says. “At the end, you’ll slurp up the remaining broth and noodles.” See Tinyurl.com/Viet-ChineseHotPotRecipe.

French Bonus: While croissants and triple-crème brie might not seem part of an ideal diet, rediscover two healthy practices from the French: Eat less and eat together. Ongoing studies at Cornell University show that we eat less if offered less. When researcher Paul Rozin, Ph.D., a psychology professor with the University of Pennsylvania, compared portions in Paris, France, and Philadelphia, Pennsylvania, the Philly portions were 25 percent larger. It’s also reflected in the two countries’ cookbook recipes. 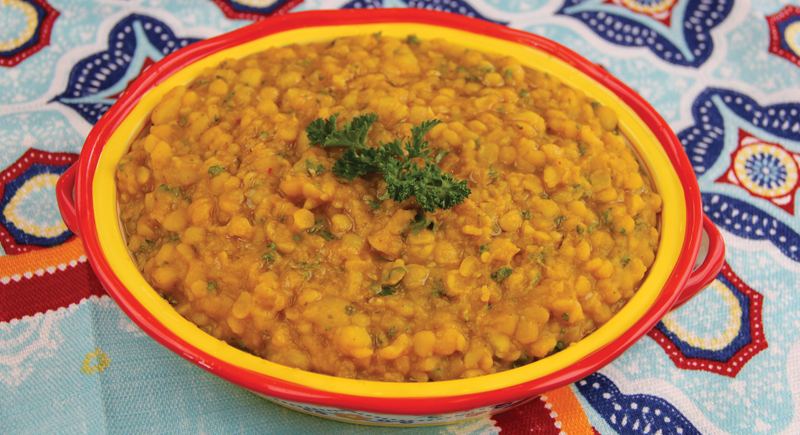 This vegan and gluten-free recipe traces its roots to Southeast India, where roasting spices to yield nutty-hot flavors creates a layered experience.

Measure the peas into a medium-size saucepan. Cover with water and rinse the grains by rubbing them in-between fingertips. Drain and repeat three to four times until the water, upon rinsing the peas, remains fairly clear.

Measure and pour 4 cups of water into the pan and bring it to a boil over medium-high heat. When some foam arises, scoop it out and discard it.

Add the potatoes and turmeric to the peas, stirring once or twice. Lower the heat to medium-low and cover the pan. Stew the mélange, stirring occasionally, until the peas are tender, but still firm-looking and the potatoes are cooked, 20 to 25 minutes.

While the peas and potatoes cook, preheat a small skillet over medium-high heat. Once the pan feels hot (a palm held close to the bottom usually feels the heat within 2 to 4 minutes), sprinkle in the chiles, coriander and cumin.

Toast the spices, shaking the pan very frequently, until the chiles blacken and smell smoky-hot and the seeds turn reddish brown and smell strongly aromatic (nutty with citrus undertones), 1 to 2 minutes.

Transfer this spice blend to a blender jar and plunk in the tomato. Purée, scraping the insides of the jar as needed, to make a smooth, reddish brown paste with a smoky aroma.

Once the peas are cooked, scrape the spicy, well-seasoned tomato paste into the pan. Stir in the cilantro and salt.

Set the heat to medium-high and vigorously boil the dal, uncovered, stirring occasionally, to allow the flavors to mingle and the sauce to slightly thicken, 12 to 15 minutes. For a thicker sauce, mash some of the peas and potatoes with the back of a spoon. Serve warm. 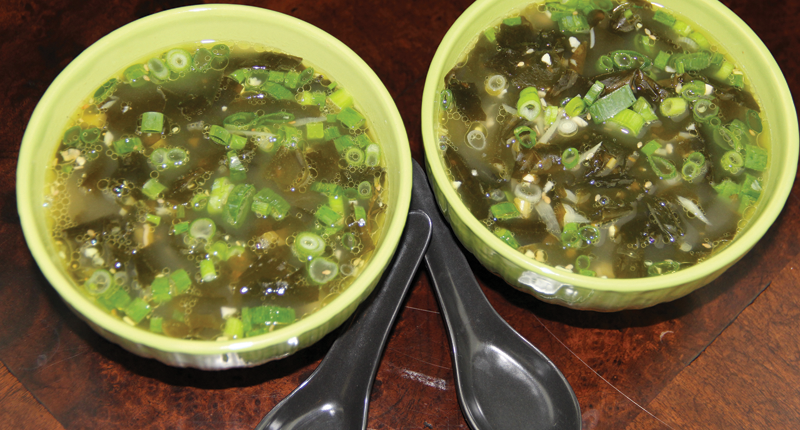 This soup satisfies a body’s call for a dish rich in minerals and vitamins.

Add the chicken broth and sake, then bring the mixture to a boil. Add the wakame and the sesame seeds. Season the soup with a few drops of tamari and ground white pepper, and add the green part of the scallions. 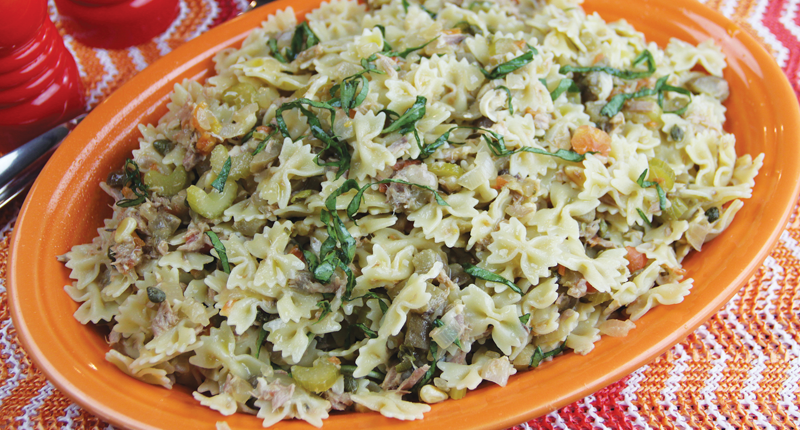 Try adding a sliced avocado or a can of tuna fish packed in olive oil.

For the caponata, heat the olive oil in a large skillet over medium heat. Add the eggplant and cook over medium-high heat, for 15 minutes, until lightly browned, mixing often.

Remove the eggplant with a slotted spoon and add the onions and celery to the skillet. Lower the heat and sauté, stirring occasionally. When the celery is tender, in about 10 minutes, add the tomatoes. Cover and continue to cook, mixing the vegetables together, for 10 minutes more. Add the eggplant.

Drain the capers and soak them in cold water for 15 minutes. Rinse and blot on a paper towel.

In a small pan, heat the vinegar and natural sugar together. As soon as the mixture boils, add desired amount of capers and pine nuts, then salt and pepper to taste. Simmer for 1 minute, and then add to the eggplant mixture. Cook over a low heat for 5 minutes. Adjust the seasoning.

Transfer to a large serving bowl. The dish is best at room temperature, but can be cold.

For the pasta, bring a big pot of salted water to a boil and add the pasta. Cook until al dente, drain and pour over the caponata. Add the tuna if desired. Toss gently and garnish with the Parmesan cheese and fresh basil. 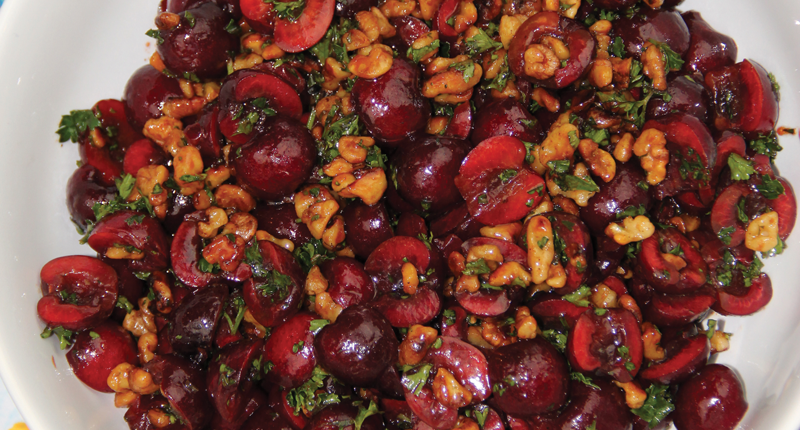 This salad combines fresh summer fruits from the U.S. and Lebanon. Pomegranate molasses is a bottled condiment available at Middle Eastern markets and specialized grocers.

In a decorative small salad bowl, combine the cherries, walnuts and parsley.

In a small prep bowl, whisk the pomegranate molasses, lemon juice, olive oil and salt until it emulsifies.

Dress the salad with the vinaigrette and serve immediately, or later, at room temperature.