by Julie Peterson
When people think about heart health, what generally comes to mind is the fist-sized muscle that pumps and oxygenates the body’s lifeblood. However, the heart of the matter is not the pump itself, but the vascular system—the network of veins, arteries and capillaries that distributes blood to every cell in the body, delivering nutrients and eliminating waste.
Each human adult harbors an astonishing 60,000 miles of blood vessels—enough to wrap around the planet twice. Keeping these hard-working vessels supple and open is the key not only to avoiding disease, but also to ensuring a long and healthy life.
The alternative—arteriosclerosis, or hardening of the arteries—can slowly and silently bring on cardiovascular disease (CVD), which can result in a heart attack, stroke, vision loss and cognitive decline. CVD is the leading cause of death in the U.S., killing one in four Americans, according to the U.S. Centers for Disease Control and Prevention (CDC). By 2035, nearly half the population—45 percent—is predicted to have some form of the disease.
“A hundred years ago, we were farming the back 40 with a team of horses, eating what we grew. Kids don’t get out and ride bikes; they’re playing video games and eating crap. There’s very little doubt how we got to this problem,” says John Osborne, M.D., director of cardiology at State of the Heart Cardiology, near Dallas.
Yet, the nation’s number one killer, which can fester for decades without symptoms, is largely preventable and reversible. Only 15 percent of CVD is related to genetics; the rest is attributed to lifestyle, and the right choices can make all the difference. The key is to adopt heart-healthy habits before the body delivers a potentially fatal warning.
“The initial presentation of heart disease can be an acute catastrophic event that results in death in half the men and two-thirds of the women. That’s not treatable,” warns Osborne.

The first step toward cardiovascular health is awareness. Important indicators of CVD risk include:

Any of these factors can increase the risk of CVD, but possessing a cluster of the first five comprises a condition called metabolic syndrome, which significantly increases the potential for heart disease and Type 2 diabetes—itself a significant risk factor that can damage blood vessels, as well as the organs they support.
“While diabetes is the seventh-leading cause of death in the United States, this figure belies the fact that most people with diabetes die of heart disease, kidney failure and other complications,” says Brenda Davis, RD, of Alberta, Canada, author of Kick Diabetes Essentials: The Diet and Lifestyle Guide.
Metabolic syndrome, like CVD, has few obvious symptoms and is on the rise: Nearly one-third of adults in the U.S. have it, according to the CDC. The one distinct marker for the condition is an accumulation of fat around the waistline, characterized by a measurement of over 35 inches for women and 40 for men.

“When a disease is lifestyle-induced, the only thing that can reverse it is a dramatic change in diet and lifestyle,” says Davis. “We’ve seen over and over again that it works.”
Know the Numbers
CVD flies under the radar even though it’s increasingly common at younger ages. The Journal of the American Medical Association released a study in December 2019 stating that about one in four young adults in the U.S. have pre-diabetes, putting them at increased risk for Type 2 diabetes and CVD.
Lisa McDowell, director of clinical nutrition and wellness at St. Joseph’s Mercy Health System, in Ann Arbor, Michigan, and team dietitian for the Detroit Red Wings, works with elite athletes of all ages and notes that they more likely know their favorite player’s jersey number than their own health numbers. “Learn what your blood pressure is, know your body mass index, get your cholesterol levels and triglycerides and your [hemoglobin] A1C. Know these numbers early on and, if there’s a problem, fix it,” she advises.
While simple blood tests help monitor indicators for CVD, more sophisticated tests can be even more revealing. In 2018, the American College of Cardiology and the American Heart Association (AHA) jointly issued new guidelines for patients over age 50 to get a computerized tomography (CT) scan to determine their calcium score. The procedure checks for hardening of the arteries and predicts the risk of a 10-year future cardiovascular event.
“This identifies people who have pre-clinical atherosclerosis, regardless of risk factors,” says Osborne. “It also helps people modify behaviors, because they are faced with a diagnosis.”
Yale R. Smith, a Melbourne, Florida, M.D., who specializes in metabolic and functional medicine, utilizes the U.S. Food & Drug Administration-approved protein unstable lesion signature (PULS) blood test. Recommended for patients in their 40s, it measures inflammatory biomarkers for the body’s immune system response to arterial injury and provides a chronological heart age and risk of a CVD event.
“If you can show someone the future, it’s a wake-up call to make lifestyle changes to increase longevity,” Smith says.
Eat for Heart Health
Perhaps the single most important change that people can make is diet. “But a lot of people don’t want lifestyle medicine—they’d rather take a statin with their Big Mac,” says McDowell. 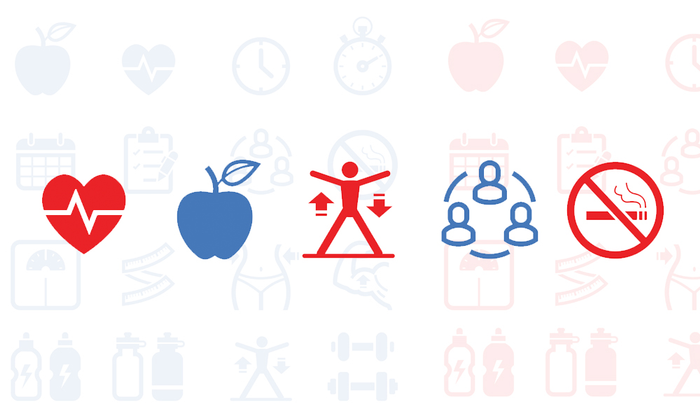 Shutterstock.com
Preventing or reversing CVD requires diligence, but it’s largely about eating real, whole food—and mostly plants. This means avoiding processed foods and consuming less salt, trans fats, saturated fat and cholesterol; and more fruits, vegetables, whole grains, nuts and seeds.
“There’s not an excess of blueberries in the American diet; there’s an excess of relatively inexpensive, highly processed junk foods in large containers,” says McDowell. Overcoming the urge to grab fast and easy foods requires education. “Everyone needs to learn how to read a food label and avoid foods linked to vascular disease,” she adds.
Vegans have healthier cholesterol levels in their blood compared to vegetarians, which in turn have better levels than meat-eaters. Study-verified diets that lower CVD indicators also include the Mediterranean diet, as well as two developed by the National Heart, Lung, and Blood Institute: the Dietary Approaches to Stop Hypertension (DASH) diet and the Therapeutic Lifestyle Changes (TLC) diet, which also addresses exercise and weight control.
“I don’t believe that one diet fits everybody, but there’s a preponderance of evidence that the more plant compounds you get, the better off you are,” says McDowell.

Some cardiovascular boosters:
Leafy greens flush out excess sodium and magnesium, and reduce inflammation.
Berries improve circulation by boosting nitric oxide, which expands blood vessels.
Pomegranate juice lowers blood pressure and reduces plaque formation.
Walnuts, peanuts and almonds lower LDL, the “bad cholesterol”.
Oily fish, chia and flax seeds with omega-3 fatty acids lower triglycerides.
Soy with anti-inflammatory isoflavones helps dilate blood vessels. “We could eat tofu, tempeh, miso, edamame, soy beans or even organic soy ‘veggie meats’ in place of red meat,” says Davis.
Yogurt, kefir and other fermented probiotic dairy products help improve glycemic control, blood lipids, cholesterol and blood pressure.
Supplements can be very helpful:
Red yeast rice extract, much like a statin, significantly lowers total cholesterol and LDL.
Coenzyme Q10, a powerful antioxidant, lowers blood pressure and combats the side effects of statins.
Omega-3s in fish oil supplements reduce heart risk in healthy people and those already diagnosed with CVD risk.
Nicotinamide riboside improves blood pressure and arterial health in those with mild hypertension.
Garlic, fresh or in capsules, can lower cholesterol and blood pressure.
Move It
Sitting all day and then briefly exercising doesn’t provide the same benefit as moving periodically throughout the day. Take more frequent breaks from sitting, get up to move around for a couple of minutes every 30 minutes.
Exercise strengthens the endothelium, the innermost of an artery’s three layers, and produces nitric oxide, which helps keep arteries open and healthy. Getting the blood moving lowers cholesterol and blood pressure, and increases oxygen and nutrients to the body.
Exercising outdoors provides additional benefits. Research from the Barcelona Institute for Global Health found that exposure to green spaces helped prevent metabolic syndrome.
Stress Less, Socialize More
Spending even 20 minutes outdoors in nature can do wonders for high blood pressure and cortisol levels, studies show.
Walking or talking with a friend deepens social engagement, a key factor in lowering CVD risk: “Having the right tribe is crucial,” says McDowell. “If you’re with people who support you and make you laugh, you feel less stress.”
Walking a dog outdoors gets three cardiovascular pluses—exercise, nature and sociability, as dogs tend to be tail-wagging ice-breakers. Further, merely stroking a pet lowers blood pressure.
Apps like Headspace and Insight Timer make it easy to do meditation, which studies suggest may reduce overall CVD risk.
Don’t Smoke
Not starting to smoke or vape at all is ideal for cardiovascular health, but quitting allows the body to begin to heal, reducing the risk of coronary heart disease after one year by 50 percent, reports the AHA; 14 years later, the risk is the same as a non-smoker’s.
“It’s not intuitively easy to make healthy decisions,” says McDowell. “We have to learn how to make good choices.” 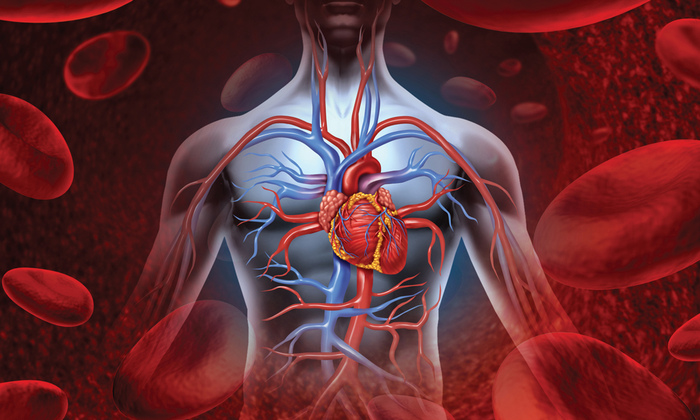 High blood pressure occurs when the force of blood pushing against the vessel walls is too high, making the heart and vessels work harder. The friction damages the endothelium—the inner lining of veins and arteries—plaque builds up, the vessels narrow and blood pressure increases even more. Contributing factors include being sedentary, overweight and consuming excessive alcohol or salt.

A waxy, fat-like substance found in all cells of the body, cholesterol can pile up (mostly as a consequence of poor diet) and stick to arterial walls, creating plaque that stymies blood flow to the heart.

The end product of digesting fats in food, triglycerides become fat in the blood that gives the body energy. Numbers climb with consumption of refined carbohydrates, simple sugars and fatty foods, contributing to arteriosclerosis.

A cluster of conditions that affect up to a third of Americans, metabolic syndrome is defined by high blood pressure; high levels of blood sugar, cholesterol and triglycerides; and excess fat around the waist. It’s closely linked to Type 2 diabetes, another CVD risk factor.

Obesity—which afflicts almost 40 percent of American adults—causes chronic inflammation, harms the endothelium and causes poor cholesterol numbers. A 12-year study of 17,640 Europeans, published in the European Heart Journal, found that obese people with metabolic risk factors were two-and-a-half times as likely to have heart disease as those of normal weight.

When stressed by such factors as work overload, family strife or traumatic memories, the body releases adrenaline, which causes acceleration of breathing and heart rate, contraction of vessels and a rise in blood sugar. Chronic stress can cause constricted arteries that lead to arteriosclerosis and inflammation of the endothelium. Further, stressed people often turn to vascular-destructive activities such as smoking, drinking and binge eating.

Previous studies have linked processed foods to hypertension and high cholesterol, and a 2019 British Medical Journal study of 105,000 adults reported that a 10 percent increase in the consumption of processed foods corresponded to a 12 percent overall increase in cardiovascular disease.

Chronic inflammation, caused by such factors as fried and processed foods, smoking, obesity, alcohol and stress, can trigger the immune system to attack healthy tissues, including the endothelium, raising CVD risk. C-reactive protein (CRP), an inflammation marker, is measured by the hsCRP blood test. Men with higher CRP levels had three times the risk of heart attack and twice the risk of stroke, Harvard scientists have found.

A lack of regular, ongoing physical activity has been shown to dramatically increase obesity, blood pressure, cholesterol and inflammation. A 2019 British study found that artery functions declined and CVD risk factors worsened in just two weeks when active exercisers reduced their daily steps from 10,000 to 1,000.

Nicotine, carbon monoxide and chemicals in cigarettes increase blood pressure and heart rate, damage the endothelium and cause blood platelets to clot more, which is why smokers are two to four times more likely to get cardiovascular disease. E-cigarettes and cigars may be worse due to higher doses of nicotine, the AHA warns.